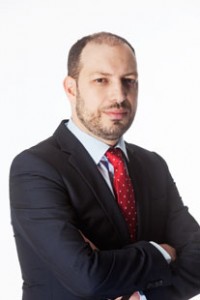 Staff Neurosurgeon
Doctoral thesis at the University of Tübingen, Germany

Alexandros Viziotis was accepted at the Medical School of the University of Ioannina in September 1997. During his 2nd year of studies he excelled among his fellow students and received a scholarship from the State Scholarships Foundation. He graduated in July 2003 receiving the grade point average "Very Good" (8 25/66).

Following that, he worked as General Surgery intern at the Kyparissia General Hospital Surgery Clinic (January 2006 - October 2006), and at the "Agios Savvas" Cancer - Oncology Hospital of Athens 2nd Surgery Clinic (November 2006 - May 2007). He then served his military service as army doctor (May 2007 - May 2008).

In 2009, he participated for one year as researcher at the Institute of Medical Psychology and Behavioral Neurobiology of the University of Tübingen Medical School in Germany, on the research subject of brain-machine interface as complementary tool in restoring the mobility of patients who have suffered a cerebrovascular event. From January 2010 to September 2014 he completed his neurosurgical training at the "Georgios Gennimatas" General Hospital of Athens. In December 2015 he successfully presented his doctoral thesis at the University of Tübingen, Germany.

He has participated in a large number of publications, presentations and scientific posters, both in Greece and abroad. He is Staff Neurosurgeon at  "Henry Dunant Hospital Center" and "Iaso Children's Hospital".